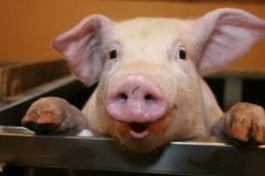 “They gon’ stink, ok, so warn your husband.  He might want to leave while they cookin’.”

The old, black woman explained from a broken down couch.  Holding her hand up, she stopped me from asking more questions.  She started coughing and wheezing as she tried to catch her breath from so much talking.  She wore a blue and yellow dashiki with wooden earrings that swung violently back and forth as she continued to cough and struggle to breathe.

“Should I be writing this down?” I asked with my pen poised to take notes.

“No,” she rasped, “I’ll tell you what you do.  Get the water boiling and call me, I’ll walk you through the rest of it.”

The conversation started when the visit should have been ending.

I couldn’t help myself but to ask the loaded question, “Any Thanksgiving plans?”

After the woman regained her breath, I went home ready to boil a pot of ‘chitlins’ or chitterlings, as they are formally called.  However, it didn’t take long before I was stopped cold in my culinary tracks – temporarily.

“I’m not eating those,” my husband declared, when he discovered what I was about to make. “You know what they are right?” he asked.

“Of course I know, they’re a Southern treat served at Thanksgiving, Christmas and Easter,” I replied.

Anxious to bust my Southern cooking bubble, my husband grinned, “Pig intestines, hog guts- that’s what they are and I’m not eating them.”

I quickly re-strategized to gain his support and sweetly asked, “Won’t you at least humor me and try one?”

The bad man laughed, “We aren’t courting anymore.  I don’t have to eat anything I don’t want to anymore.”

I knew he meant it and that’s when my next plan hatched, bigger than just a pot of chitlins.  I thought, poor husband, you will be hungry this Thanksgiving when I prepare a feast that you refuse to eat.

In the true spirit of Southern cooking, I enlisted the help of my mother (the rock climber) to try out as many recipes that I can gather from my clients.  My clients are giving me tips and food combinations that I’ve never considered, but make my mouth water to think about, which I frequently do.  None of these recipes are written down, they come straight from memory more or less the same as their mammy’s taught them and their mammy’s mammy taught them.

Collard greens, fried chicken, macaroni salad, pineapple and brown sugar encrusted turkey, mashed potatoes, Brussels sprouts, chitlins (of course), and sweet potato pie and any other dishes, sides or desserts that I can glean from my clients over the next few days will be served.

We’ll open the windows as the chitlins stew to let out the smell into the open air, and when my husband complains, I’ll say, “I warned you, they gon’ stink.”

5 thoughts on “Chitlins’ just for you, darling.”