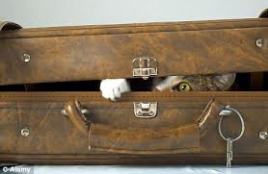 “You again?” the woman asked in delighted surprise.

The small brown cat reappeared at the window.  She had been missing for a week; her dish untouched and her box left empty.

The cat raised a solitary paw to the glass and opened her mouth, silently mewing a plea for food.

She held out her hand like a crossing guard to stop the cat from running off for another week, “Steady, steady, don’t go anywhere now.”

Crazy cat, the woman thought to herself, where has she been this whole time?  The woman pulled herself up from a wooden rocking chair, tossed the old blanket from her lap to the side, and walked towards the kitchen.

The woman looked back and the cat was watching her, and hopping from side to side in excitement about the possibility of an easy dinner.

With a bowl of kibble in one hand, the woman stepped into a pair of rubber Crocs and slid open the glass door.  A blast of cold air rushed in around her, it smelled clean and hard.  Snow covered the ground beyond the patio and the piled on top of the wooden railing.  It dusted the bright red hummingbird feeder still hanging from a hook, abandoned from the summer.

She set the dish down with the cat wrapping around her ankles in a non-stop figure eight.

“So you missed me,” she chuckled and rubbed the little cat’s head.

Before she could go back inside, she noticed the outside closet door was ajar.  She slammed it shut and made a mental note to find the key to lock it for the future.

Wait, she stopped herself.  Why was that door open?

The stray crunched greedy mouthfuls of food behind the woman, eying her with a mixture of curiosity and suspicion, as the woman stayed outside longer than usual.

Unable to shake the feeling that something was amiss, the woman reopened the closet door with a gasp.

Only a small dead mouse curled on its side remained where a tangle of two bikes, a grill, lawn chairs, flippers and snorkels, and old tennis rackets should have been crammed.

“Well Brownie,” the woman said, taking a step back.  “This is bad. This is officially not good.”

A key turned in the lock and the door opened.

“Hello, I’m home,” a man announced, tall and handsome in scrubs.  He dropped a bag from his shoulder onto the ground and kicked off his shoes.

“What in the….” He trailed off as he took in the scene in front of him.

His wife sat on the floor, grinning at him.  The brown cat was now on the wrong side of the sliding glass door.  She was purring on his wife’s lap, lazily stretched out while their sweet house-cat was monitoring the situation from beneath the rocking chair.

“Some things have happened while you were gone.  We were robbed and your bike is gone. Brownie came back and she wanted to come in. Now she lives with us, ok?”