The only noise in the office this morning is the humming of an over-worked air conditioner. The struggling appliance is perfectly wedged into place and secured by a single pane window on top. Our clever maintenance man hammered a nail into the window frame so the window cannot be lifted from the outside by a nefarious passerby and the a/c unit stolen, again.  Unfortunately, it also means that I am unable to lift the window to escape in the case of an emergency, most likely a fire.

The maintenance man addressed my concerns as adequately as possible.

“Just go out the door if there’s a fire.”

Ahhh, yes. The infinite wisdom of the maintenance man.

Underneath of the a/c unit, its electrical cord dangles listlessly like the tail of an exhausted beast with almost nothing left to offer. Yet, it must keep giving or it will face a fate worse than the broken vacuum, a fate on which nightmares are built, a final meeting with the most nefarious of the nefarious, Junkman.

Junkman is always on the search for devices and appliances with precious metals inside. He drives a rusted out pick-up truck with wooden rails rising from the sides of the back of the truck, obviously to increase his junk load capacity. Once in the dirty and callous hands of Junkman, the air conditioner will be smashed open and its guts ripped out to be scrapped.  The rest will be tossed into the nearest alley, left for the city or conscientious neighbor to pick up and properly dispose of in the dumpster or recycling bin.

The thought of this ending makes me sad. As I dwell on thoughts of this air conditioner and air conditioners of days gone by, like the ones that were stolen from the basement or the ancient unit that used to cool my childhood house, I hear heavy footsteps. Someone is rustling around in my co-workers desk and opening his candy dish. The office is not empty and I am not alone.

Maintenance people are here. Their numbers are multiplying and have doubled as of late, while office staff members are dwindling.  It is a disturbing trend especially as the building crumbles around me.  The bricks are falling from the exterior walls a few at a time.  New cracks appear in the plaster on a daily basis and connect with old cracks.  A mega crack is being formed in one of the hallways, perhaps too great for maintenance men to handle.  However, with all of the extra maintenance men tromping around in their muddy boots and dirty t-shirts, one might think the decomposition of the building would slow.

Alas, this is not the case. More building problems only means more maintenance workers and less time to spend enjoying the hum of the window air conditioner in a dilapidated and almost empty office. 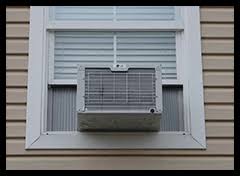 It starts when an old woman’s daughter calls to beg for an A/C unit for her mother.

I heard her break to take a drag on her cigarette.

“We just don’t have the extra money for anything like that,” she continued.

Their very understanding social worker, nodded on the other end of the phone, “Yes, that is a problem.”

I filled with a sense of false self-importance and knew the exactly what to do.  I quickly completed an application for the program without the need to exaggerate the situation.  The truth of this woman’s life was desperate enough to garner the sympathy and thereby assistance requested.

Surprisingly soon after the app was submitted, the woman was approved for cool air.  As a privilege and a right to decent living conditions as a human, or out of pity for her poverty and poor health doesn’t really matter, right?

In any case, I mustered the strength to get the A/C into my car, with the help of a co-worker, and headed off into the heart of darkness to make my special delivery.

When I pulled up in front of the shanty house, it occurred to me that they might not have the electrical wiring to support the efficient energy burning machine in my backseat.  It appeared that they didn’t have window screens, collars for their dogs or a mower to cut the grass.  I guessed that a good socket might be a stretch.  Nonetheless, I continued with my mission as I had an old lady to save.

Three women sat heavily on a sagging wooden porch.  They stared dumbly ahead until I hopped out of my car.  Then their looks turned to that of suspicion even though I called to confirm the delivery just 24 hours earlier.

“Hey there, ladies. I’ve brought you something to cool off.  I just need a little help getting it inside.”

The woman I was there to save continued to stare ahead, uninterested in my business of her rescue.  Her silver braids shone in the sun as she looked over the cracked and empty parking lot across the street.  Weeds and broken bottles were more interesting than the possibility of a room cooled to 72 degrees.

A massive woman sat next to her and yelled out, “Well, what you waiting for? Bring it in already.”

She looked like she was about to drown in the sweat as it pooled in the roll around her neck.  Her face and arms were slick with sweat, yet she sat amazingly motionless.  She was a mound of melting human, forgettable as she was unhelpful.

“Listen, I need some help. Can someone come down here and give me a hand?”  I directed the question to the only capable body, the third woman who sat on an upturned paint bucket.

She picked up the hint and was the only one to respond.

No, I just want you to experience the good feelings generated from team work, I thought.

Begrudgingly, the youngest woman shuffled down to help.  We managed to get the A/C inside once we cautiously stepped over the old woman’s swollen feet.  She couldn’t see the need to move her feet for our safe passage.  After all, she was there first.

The woman led me inside towards the nearest open window and dropped her end of the box.

“There, you can set it up here,” she declared and turned to go back outside.

So I showed myself to the door after her and left.

Nothing was said when I left.  The massive woman looked disappointed that I didn’t set up the unit and the youngest woman was dismayed that she may be tasked with the difficult chore of reading directions and setting the A/C up herself.  Meanwhile, the woman with the silver braids stared straight ahead, indifferent to world around her.  She didn’t mind the heat and never asked for the A/C.   Why should she be grateful for something that she never wanted?

I’d like to make the excuse for her that she was tired of accepting charity and even more tired of living in poverty.   Her soul was worn and weary from never having enough or any way to get it aside from the kindness of strangers.

My only regret is that I didn’t drag the A/C back out of that disgusting house that smelled of wet dog and flea killing powder, around the old woman’s legs, over the broken boards of the porch and back to my car for someone who does want it and would appreciate it.

What is gratitude in the face of charity?  What is anything in the face of charity, other than a sad state of affairs, to everyone but the giver?  In spite of this, I’m still secretly holding out for a little thank you card in the mail.  Its a silly and selfish wish, but what can I say, I’m just a little human?

“When I give food to the poor, they call me a saint. When I ask why the poor have no food, they call me a communist.”
― Hélder Câmara, Dom Helder Camara: Essential Writings

“While we do our good works let us not forget that the real solution lies in a world in which charity will have become unnecessary.”
― Chinua Achebe, Anthills of the Savannah