A kitten ran out in front of a woman walking on the sidewalk, nearly tripping her.  The kitten had left the lonely cover of a sickly bush that had lost all of its greenery in the summer drought and was heading for safety underneath of an abandoned car.  The woman screamed startled at the grey blur that nearly brushed her leg and crossed her path.  She was wearing shorts and tennis shoes and shuddered at the thought of the wild creature biting into her fleshy calf.

Wondering if it had rabies, she crouched down to see where the kitten was hiding.  The seemingly abandoned car was afflicted by a spreading disease of rust over the doors and hood, and but one of the tires were totally flattened. A yellow pineapple air freshener dangled from the rear view mirror, the woman noticed with a smirk.  I doubt its freshening anything at this point, she thought to herself.  After she crouched down, she tilted her head to one side for a better view and two pairs of glowing cat eyes stared back at her.

“Kitties,” she said. “Kitty, kitty, kitty,” she tried calling them and stopped as they gazed back at her without changing position.  Although not hissing or baring teeth, she noted that they did not appear to be friendly kitties.  Shrugging her shoulders, she stood up to continue her walk and screamed again.

She was already jumpy and suspicious of every man whom she encountered.  It was a new neighborhood for her and from what she had been told, a rough area.  Her mother advised not to wear any jewelry, carry mace and avoid eye contact with everyone.  A friend contributed to her fears by relaying a story about a recent rape a few streets away that happened the week before she moved.  The ladies in the leasing office sealed the deal on the woman’s mistrust for all whom she encountered by suggesting that she only walk outside before noon and preferably with someone and “you should be fine,” they reassured her.

Suddenly, a man was standing a few feet from her on the sidewalk loosely holding a cigarette between two grubby fingers.  His face was unshaved and bore the telltale pockmark scars of teenage acne. Holes were in his black Van Halen t-shirt and his jeans were filthy.  His hair was a dry brown and stuck out in tufts from the sides of his head.  He wore an expression on his face that seemed to say either, I’m bat-shit crazy, or I’m pissed and now you’re gonna pay. The woman had a hard time reading his face but she was also panicking which may have impaired her judgment.

Oh God, she thought to herself, it’s happening.  He’s going to rob me and rape me, right here in the parking lot.  Oh God, oh god, help me think.

“You messin’ with my old lady’s cats?” he demanded to know of her and took a deep drag from his cigarette while looking her up and down.

Blood pounded in the woman’s head and her heart beat wildly against the inner wall of her thin chest. Be brave, she silently rallied with herself.  Taking a deep breath, she shot off running away from the awful smoking man and his bad intentions.  Leaving both behind in a cloud of smoke, the woman kept running around the building and ducked underneath of the wooden walkway next to a pond and on the back of her apartment building.  The walkway was connected to the apartment building and was built up high enough to create lean-to type shelter underneath of it.  She crawled all the way to the edge of the makeshift shelter and waited for pursuit.  Surprised that no one came after several minutes, she exhaled after realizing that she had been holding her breath and began to relax.

Glancing around at her new surroundings, she noticed a solitary flip flop, crushed beer cans, a tube top, and five white buckets with wire cages on top of each one.  They were pushed out to the very edge of the walkway’s protective overhead cover, and were sitting halfway in the sun and shade.  Movement out of the corner of her eye caught her attention.  It was another kitten scampering away followed by another one, both alarmed by the woman’s presence in their ‘hood.  She shuddered and wondered if they were possibly related to the two underneath of the abandoned car. The buckets drew her attention away from the feral creatures and the woman crept forward.  They were old paint buckets filled with dirt, delicate green tendrils snaked out towards the light.

Extending her gaze, the woman scanned the edge of the pond and had a rather good view of yet another cat hunting in the weeds.  This one was fully grown and well fed with a thick orange coat, just about to close in on its helpless prey. 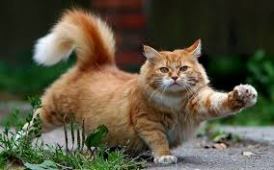 With still no pursuit from the madman of the parking lot, the woman felt secure enough to creep the rest of the way out of her hiding spot when she heard, “Kitties, kitties!  Come for dinner, kitties!”  The voice belonged to a female but it was raspy and that of a life time smoker, like from age 12 to present, which was perhaps 50 or so.  She was a small woman, with thin, dirty blond hair that was pulled back into a greasy pony tail.  In her hands, she carefully carried bowls of food and water, walking slowly enough to not spill a drop.  A silky black cat was wrapping itself around her legs and purring in hopes of a few bites to eat.

“My God, another damned cat,” the woman exclaimed without thinking and saw a skinny tabby cat with a sagging belly trotting up at the cat lady’s call.

“Are all these cats yours?” the woman asked the cat lady who was still holding the bowls and leading a parade of cats.  Inwardly, the woman recoiled at the thought of the combination of the cats’ diseases, fleas, and intestinal worms. And that’s not to mention the dandruff and fur.

“Yeah, they’re mine, and so are those tomatoes down there,” she replied and nodded her head in the directions of the paint buckets.  “They’re all I’ve got, next to my no-good-for-nothing husband.  There are 10 cats all together, sometimes 11 or 12, and five buckets of tomatoes.  The apartment manager is after me because of them. He wants me to stop feeding them, calls its feral cat community,” she explained.

“He wants you to stop feeding the cats or the tomatoes?” the woman asked, snickering to herself.

“The cats,” she spat out, “of course, the cats.” She set the bowls down and took a few steps back to give her cats room to move in for dinner.

“They’re my life and if the manager here evicts me, then I’ll just pack up my cats and tomatoes and go where we’ll be appreciated,” she declared.  Instantly something became clear to the woman, this was more than just a cat lady.  This was a cat lady who also loved tomatoes and was willing to give up her apartment for the well-being of a horde of wild cats that she had collected and from which she would never benefit.  With much to consider, the woman waved and walked back to her apartment away from the cats and tomatoes.  She resolved to get a rabies vaccine in the very near future. 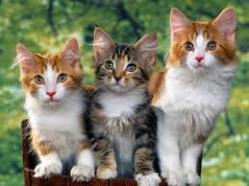