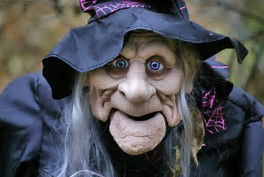 A tall man with a hooked beak for a nose and heavy eyebrows stared over the wooden slats of the fence.  He wore grey sweat pants pulled up over his hips and a thin long sleeve t-shirt that outlined sharp shoulder blades and bony shoulders. Thin wrists and long, pale hands stuck out from the ends of the sleeves.  He was like a scarecrow hanging onto the fence, scaring off the birds and small rodents.

“Mike, what are you doing?” a woman asked from behind him, suddenly arriving, and seemingly appearing from out of thin air.   She had shiny, black hair and wore a pair of neon green tennis shoes and a matching athletic top.

He gasped and tried to step back.  He stumbled, finding he was already against the fence without any additional room for his long legs to stretch.  Then he realized several things; it was just Lani and she must have walked over, she therefore did not appear from out of thin air and in conclusion, he decided that witchcraft was likely not involved.  He felt relieved and relaxed back into his original watch over the fence.

“Hey…” he gave a sheepish greeting at his exaggerated reaction.

Lani narrowed her eyes as she tried to understand what he was doing staring over the fence.  It was not lost on her that his neighbor, Shelly, was young, single, and often sunbathed in a very itty, bitty polka dot bikini.  Lani’s heart rate increased as she felt an anger rise from her gut into her chest as she watched him continue to peer over the fence without shame or remorse.

The sound of a wail, presumably Shelly, broke her chain of thoughts.

“Princess,” she cried out.

Mike waved her forward and motioned with his heavy eyebrows to look over the fence.

Lani crept up to the fence and saw that Shelly was not the target of the man’s attention.  Rather, it was a lump of fur that lay on its side in the grass.

“Something’s wrong with Princess,” Mike whispered in an astute observation.

“Help!” Shelly called, perhaps sensing a nearby audience, “someone help me with Princess.”

Shelly knelt down next to the dog as Mike and Lani made their way around the fence, leaving one yard to enter another.

“She just got back from the groomer and I let her out and the next thing I know she’s on her side breathing like that.”

Princess lay on her side, she drew in ragged gasps of air.  Her side rose and fell as she stared straight ahead with unseeing, dull brown eyes.

“This is not good,” Lani surmised as she knelt next to Shelly and the animal.

“What happened? What’s wrong, Princess?” Shelly asked, not believing the scene as it unfolded in front of her.

The dog slowly breathed in and out and then gave one last puff of air.  Its side did not rise again as Shelly and Lani kneeled next to the animal and Mike towered above the gathering.

“Princess, princess, can you hear me? Hang in there with me.  Princess?” Shelly ran her hand along the dog’s side and held her head in her hand.

Lani crossed her index and middle fingers on the dog’s chest and pumped to the beat of “Stayin’ Alive” by the BeeGees, just like she learned for an infant in Beginner’s CPR.

“This isn’t working, I have to get her to the vet,” Shelly whimpered. “I’m going to get the car. Will you bring her out to the drive way?”

A vet was not going to help Princess, there was nothing shy of a water-into-wine, roll away the stone type of a miracle that would bring that dog back to life.  It wouldn’t be long before she started to stiffen up with rigor mortis, hopefully, the vet could break the news about the miracle shortage before that happened.

After the car peeled out with the dead dog stowed away into the backseat, Lani turned to Mike.

“What happened back there, really?”

“Princess was barking and I was picking up twigs in the yard.  She barked and barked and barked and wouldn’t stop and I stood up and looked at her.  That’s all I did, I swear, and she just sort of stopped and fell over onto her side,” he raised one hand and placed the other over his heart in a solemn oath of truth.

Her tone changed and she narrowed her eyes for the second time and started walking backwards towards the road, away from this yard and this man and this clear case of evil intent.  She repeated herself but this time, there was no question about it.  It was a fact and a statement, “You killed Princess.”